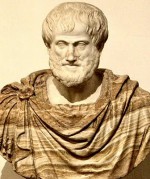 In order to answer the question, “What is a State?” Aristotle begins by asking, “Who is the citizen, and what is the meaning of the term?” This he does because the state is a composite whole made up of many parts—the citizens who compose it. The citizen whom Aristotle is seeking to define is the citizen in the strictest sense, against whom no exception can be made, so that “a citizen is not a citizen because he lives in a certain place; nor is he a citizen who has no legal right except that of suing and being sued; for this right may be enjoyed under the provisions of a treaty.”[1] This latter class are citizens only in a qualified sense, in the same way that children and old men are said to be citizens imperfectly, and not simply. In practice a citizen is defined as one who is born of parents who are citizens, but this is not a satisfactory definition because it cannot apply to the first inhabitants or founders of a state, nor to those who have had the franchise conferred on them by the state. A citizen in the proper sense of the term, then, is one who shares in the administration of justice, and in offices. The most comprehensive definition is one who shares in an “indefinite” office. This term includes the office of “discast” (juryman and judge in one) and the office of “ecclesiast” (member of the ecclesia or assembly of citizens). But since the citizen of necessity differs under each form of government, this definition is best adapted to the citizen of a democracy. In other states, such as Sparta and Carthage, it is the holder of a definite, and not of an indefinite, office who legislates and judges. Here the citizen would be one who shares in a definite office.

“Aristotle’s conception of a citizen is widely different from the modern conception because it is not representative but primary government that he has in view. His citizen is not content to have a say in the choosing of his rulers; every citizen is actually to rule in turn, and not merely in the sense of being a member of the executive, but in the sense, a more important one for Aristotle, of helping to make the laws of his state; for to the executive is assigned the comparatively small function supplementing the laws when they are inadequate owing to their generality. It is owing to this lofty conception of a citizen’s duties that he so closely narrows the citizen body.”[2] This is one of the reasons why Aristotle excludes the mechanic class from citizenship. He says they have not the leisure time to sit in the assembly and so share in the ruling of the government. The best forms of government also exclude this class because no man (according to Aristotle) can practice virtue who is living the life of a mechanic or laborer. No Christian would agree with Aristotle on this last point, though it is undeniable that excessive manual labor does tend to deliberalize the soul. After all, if a man has to spend practically all of his waking hours working so as to eke out a bare existence for himself and family, he certainly cannot develop himself fully as a man by the cultivation of his mind, which demands leisure and relaxation

Aristotle’s conception of the citizen would not be valid today. He failed to see the possibilities of representative government. Today we would say that the minimum requirement for citizenship is the power of voting for the representatives of the people who do the actual ruling in a democracy.

The state is defined by Aristotle as “a body of citizens sufficing for the purposes of life.”[3] In order to determine what is and what is not the act of a state, Aristotle first enquires into the question of what determines the identity of the state. Clearly it does not consist in the identity of place and inhabitants. “It is true that as the essence of a thing consists in general not in its  matter but in its form, the essence of the state must be sought for in its form or constitution.”[4] “We speak of every union or composition of elements as different when the form of their composition alters; for example, a scale containing the same sounds is said to be different, according as the Dorian or Phrygian mode is employed. And if this is true it is evident that the sameness of the state consists chiefly in the sameness of the constitution, and it may be called or not called by the same name, whether the inhabitants are the same or entirely different.”[5] I think it is safe to say that this analysis of the identity of the state is a good one and about as accurate a one as it is possible to get. Certainly, a sudden change of constitution in a state does change its identity; e.g., France before and after the Revolution.

“We are accustomed to understand by the term ‘constitution’ only the general form of government of a particular State—the sum of the arrangements which regulate the distribution within it of political functions. Aristotle meant far more by it. He comprehends under the corresponding word ‘Polity,’ not only all this, but also the substantial character of the community in question, as that expresses itself in the accepted theory of the state and in the spirit of its government. He has thus the advantage of exhibiting more clearly than is commonly done by modern writers the connection of the political institutions of a people with its life as a whole, and is less exposed to the danger of treating these as something independent and equally applicable to all communities. Here as elsewhere in the ‘Politics’ the leading characteristic of his method is the care he takes to scientifically trace everything back to its real source, and to find the principle of its explanation in its own peculiar nature.”[8]